The cruel dog and cat meat trade in Southeast Asia

Every year, millions of dogs and cats are killed for their meat, making the trade arguably one of the most severe companion animal welfare issues in Asia.

Despite continued media attention on the infamous Yulin festival in China, the sad reality is that in cities across Southeast Asia, tens of thousands of cats and dogs are killed in a brutal way every day.

Dogs and cats are stolen from their owners and snatched from the streets in Indonesia, Cambodia and Vietnam. These animals are transported long distances, often lasting days, and are killed using gruesome methods such as drowning, blow- torching, electrocution, and beating. While incredibly cruel for the animals, the trade also serves as a significant public health threat, most notably in the form of rabies.

FOUR PAWS is committed to bringing an end to the cruel dog and cat meat trade in Southeast Asia through government collaboration, supporting local stray animal care programs, rescues, and bringing awareness to the trade.

AUGUST 2020: Release of a Report and video on The Cat Meat Trade in Vietnam

FOUR PAWS and Change For Animals Foundation published a first-of-its-kind report on Vietnam’s cat meat trade in English, German and Vietnamese. This video, from footage collected during the investigation, was also released. 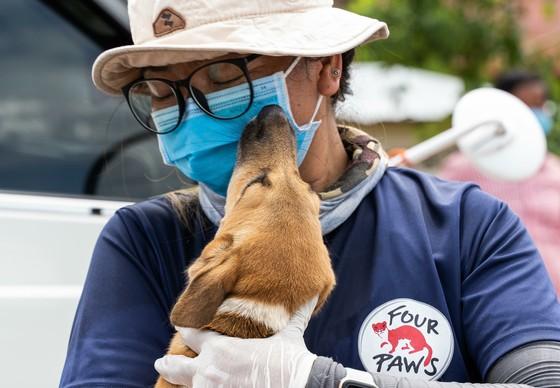 AUGUST 2020: FOUR PAWS shuts down dog slaughterhouse in Cambodia critical to the trade

Thousands of dogs are spared a gruesome death by drowning, choking, and asphyxiation. Read our press release here!

Read the story of the rescued dogs here!

FEBRUARY 2020: We release groundbreaking report on the Dog and Cat Meat Trade in Southeast Asia

We released a first-of-its-kind report on the Dog and Cat Meat Trade in Southeast Asia in English, German,  Vietnamese and Khmer, bringing attention to the scale, illegal workings and health risks of the dog and cat meat trade.
We meet with the deputy governor and multiple officials of the government of Siem Reap, home to the world-famous Angkor Wat and present our report. The government agrees to look into the trade and ways of addressing the issues it poses.

FEBRUARY 2020: We launch our campaign film

Our campaign film, telling the stories of pets stolen from their owners from the trade, launches internationally, including in Vietnam and Cambodia, receiving a significant number of engagements.

Our petition reaches 500,000 signatures in less than 5 months. Sign our petition now and #ProtectMillions!

OCTOBER 2019: Closure of a slaughterhouse in Cambodia

We close a slaughterhouse in Takeo province, Cambodia, where 2,000 dogs were killed every year, helping the restaurant owner to move to a cruelty-free business farming rice and selling water. We rescue 10 dogs during this closure, and rehabilitate them over the coming months. Read our press release here!

OCTOBER 2019: Launch of the petition and our campaign

We launch our petition and campaign page urging the governments of Cambodia, Indonesia and Vietnam to take action against the trade, aiming for 1 million signatures. Sign our petition now and #ProtectMillions!Get more information here: www.dogcatmeat.four-paws.org

SEPTEMBER 2019: Interception of 51 dogs destined for the meat trade by authorities in Thanh Hoa province in Vietnam

On-the-ground medical care is provided to rescued dogs by the Asia Canine Protection Alliance (of which FOUR PAWS is a member). Read more here!

JULY 2019: In Bali 77 stalls selling dog meat have been closed

In Bali, Indonesia’s most popular tourist destination, a total of 77 stalls selling dog meat have been closed, with the authorities stating that they will continue to take action against those who continue to trade in and sell dog meat. The Head of Animal Health stated that the sale of dog meat is 'clearly prohibited (by law) because dog meat is not considered food' and the trade has the 'potential to spread the dangerous rabies virus'.  Get more details here.

The action plan involves closing 21 stalls selling dog meat in the regency, and the creation of alternative livelihoods for people currently reliant on the trade. Read more here!

For the first time in Cambodia, more than 70 participants from key government agencies and important stakeholders met to discuss the important role dogs play in Khmer society and commit to tackling the dog meat trade. Read more on Facebook!

The first of its kind in Indonesia, an online educational toolkit will provide desperately needed resources on animal welfare and responsible pet ownership for the general public, teachers, and students throughout the country. Read more here!

Government officials begin to recognise the importance of ending the trade for human health and animal welfare. Get more details here.

This exciting program in Central Vietnam collaborates with local groups Vietnam Cat Welfare in Hoi An and PAWS for Compassion in Da Nang to tackle the cruel cat meat trade. Read more here!

The clinic provides vital medical care to dogs and cats at the ​Animal Friends Manado Indonesia shelter, many of whom had been rescued from the extreme live animal markets of Tomohon. During the clinic, a total of 64 dogs and cats were sterilised and ​provided medical care.

After lobbying and public campaigns by 'Dog Meat Free Indonesia', of which FOUR PAWS is a member, the Indonesia government issues a directive to provinces to end the dog meat trade.

SEPTEMBER 2018: In Hanoi, Vietnam officials report dog meat sales will be banned in the city center by 2021

This announcement is a positive step forward in ending the trade, but FOUR PAWS continues to work to ensure action is taken to protect Vietnam's cats and dogs.