Good news for Kaavan, the world’s loneliest elephant: The Islamabad High Court has now appointed Dr Amir Khalil, veterinarian at the global animal welfare organisation FOUR PAWS, as amicus curiae and assigned him with the logistical organisation and execution of Kaavan’s relocation from Pakistan to Cambodia. In early September, FOUR PAWS gave the green light for the elephant’s transfer after medically examining him. The transfer from Marghazar Zoo in Islamabad to the Cambodia Wildlife Sanctuary is planned for the end of November and is supported by the NGO Free The Wild. Its co-founder, US superstar Cher, has been fighting for the elephant’s departure since 2016. With the relocation of Kaavan, not only will Pakistan's last Asian elephant leave the country, but the infamous zoo in Islamabad will finally close.

Until then the FOUR PAWS team still has a lot of work to do. In addition to organising a suitable aircraft, a transport crate for Kaavan, who weighs over five tonnes and is more than three metres high, is currently being built. Furthermore, an elephant expert will train Kaavan for several weeks to securely enter the crate. For safety reasons FOUR PAWS will not sedate the elephant for the relocation but a team of wildlife veterinarians will accompany Kaavan on his journey to Cambodia. Therefore, it is even more important that he keeps his calm during the trip. For this, Kaavan had to learn to trust people again. “In the past weeks I have spent almost every day with Kaavan, talking and singing Frank Sinatra songs to him. This may seem absurd to outsiders, but it allowed me to build a close relationship with the elephant. Now he is ready to work with his trainer. As his personal physician, I will not leave Kaavan's side during his entire journey,” says Dr Amir Khalil, FOUR PAWS veterinarian and responsible for the evacuation of Marghazar Zoo in Islamabad.

“It fills me with incredible joy to see that Kaavan's suffering is finally coming to an end. I cannot wait to bring him to Cambodia together with the FOUR PAWS team. For the past four years my partners in Free The Wild – Mark, Gina and I – have been working tirelessly to achieve this moment. ‘Free Kaavan’ will soon no longer be just a hashtag, but reality. And that makes me extremely proud and happy”

adds Cher, US superstar and co-founder of Free The Wild.

Together with the Islamabad Wildlife Management Board (IWMB), FOUR PAWS has already safely relocated three wolves, several monkeys, and all the rabbits, that used to be kept in Marghazar Zoo, within Pakistan. Apart from elephant Kaavan, only the two Himalayan brown bears Suzie and Bubloo as well as one deer and five monkeys are still at the zoo. Before the bears came to Marghazar Zoo, they had to perform as so-called dancing bears. Sadly, as is common for performing bears, the teeth are removed to prevent them from injuring their owner, the same was true for Suzie and Bubloo. FOUR PAWS has already performed an emergency surgery on the 17-year-old female bear, as she suffered from a severely infected wound caused by a recent tumour removal. Both bears were found to have serious behavioural issues. FOUR PAWS intends to bring Suzie and Bubloo to one of their own sanctuaries in mid-November. Solutions for the remaining monkeys and the deer are currently being finalised.

From wildlife sanctuary to substandard zoo

The 28-hectare Marghazar Zoo was originally opened in 1978 as a wildlife sanctuary in the Margalla Hills in Islamabad but was later converted into a zoo. The zoo has been owned by the Pakistani capital Islamabad since its opening. Elephant Kaavan came to Pakistan as a gift from Sri Lanka in 1985. From 1990 on, he shared his enclosure at Marghazar Zoo with his partner Saheli, but since her death in 2012, Kaavan has lived a lonely existence. The zoo repeatedly made headlines because of its poor keeping conditions. Only in July 2020 shocking videos of two lions fighting a fire in their small enclosure appeared. Both big cats eventually died because of smoke inhalation. In recent years, over 500 zoo animals have been reported missing, and in the last four years alone, over two dozen animals have died at Marghazar Zoo. 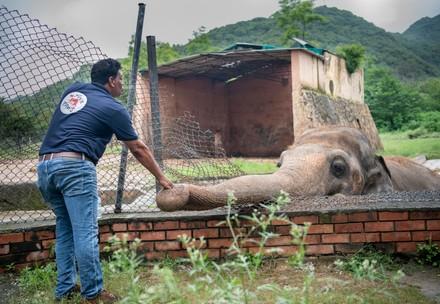 Green light for the rescue of the world's loneliest elephant