It is almost midday in the Eastern Free State and a wintry wind is blowing over the hills and mountains. In the distance, on the winding road a pick-up truck is approaching the buildings under the blue gum trees. The tranquilised female tiger Mafalda is brought in a crate on the back of the truck to the animal clinic on the LIONSROCK Big Cat Sanctuary to have her medical examination and to be spayed.

She is one of four tigers that arrived early in March at the sanctuary after being rescued from a train cage on a railway siding near San Luis in Argentina. It is just over three months since Mafalda first stepped on green grass for the first time and could see the sky all the time.

After the plane journey across the Atlantic Ocean and the 300 kilometres travelled by truck from OR Tambo International Airport to LIONSROCK, the four tigers were released into their enclosures in the Tiger Unit. Their health was closely monitored while they were finding their feet.

But today is the Big Day for Mafalda’s comprehensive examination.

Overseeing today’s project is the LIONSROCK site manager, Hildegard Pirker. She says it was important that Mafalda settled down before any medical interventions.

“Being a true sanctuary, we do not breed with the big cats, and it is time now for Mafalda to be spayed,” says Hildegard Pirker, Site Manager & Head of Animal Welfare Department at LIONSROCK

The oldest male, Sandro, had to undergo a small medical intervention and was settled in in his own enclosure. One of the two younger males, Messi, was settling down the past few weeks in his own camp. Male tiger Gustavo and Mafalda are together in their own patch as they get along well together.

It is Gustavo that seems to be interested when the two pick-up trucks stop at their enclosure. The consulting veterinarian from Tshwane, Peter Caldwell, climbs out and surveys the landscape and the tigers. He will be conducting the spaying procedure with LIONSROCK vet Christine Steyrer.

Peter was present when the tigers landed early in March at the airport to give them the all-clear before they travelled to their new forever home. He has a small smile around his mouth as if he is meeting up with old friends.

At the fully equipped vet’s pick-up truck, Peter prepares the anesthetic for the tranquiliser gun carefully and walks quietly towards the enclosure to make sure that the stress of the now restless Gustavo and Mafalda, is kept to the minimum. At the back of their enclosure, Messi is staring from his own camp inquisitively at the coming and going of vehicles. Up until now the animals were left mostly alone. It is the first time in weeks they have seen so many people around the enclosure even though they are visited daily by animal caretakers.

The senior animal keeper Kelly Lambe, with her team and LIONSROCK vet Christine Steyrer are all present and playing a part to ensure the tiger’s transfer from enclosure to crate go smoothly.

Once the now blind-folded Mafalda is carried on a stretcher by the animal caretakers to the truck and locked in the steel crate, the vehicle slowly makes its way back to the clinic. The 94-kilogram tiger is carefully carried into the operating room.

Just after 13:00 the team shifts her body onto the table. Mafalda lies on her back, front paws loosely hanging in the air and her tail curling down from the table. Christine begins to do the general check-up like inspecting her claws and measuring her teeth. Peter makes notes and is preparing to pick up the scalpel while his assistant, Delight Chakandinakira, shaves the lower side of her pelvis.

Peter carefully makes the first incision and make sures the almost half-hour long procedure goes according to plan. Once done, he solicits the help of junior animal caretaker, Pharmphylia Sebake, to complete the procedure.

This is truly a team effort!

There are, however, still a few examinations to be done as the exercise cannot be repeated soon. Mafalda is steered towards another room for some X-rays and to be weighed. Afterwards she is shifted and carried back into the crate, still quietly snoozing away. The LIONSROCK team gets back on the pick-up truck to round off a hard day’s work. The truck disappears down the road back to the tiger zone.

After a while, the crate stands in front of the sliding-gate and is carried into the enclosures. Now precision work and co-operation work between all team members is critical. As Mafalda has already been injected with the reversal drug the blindfold is removed, and Peter steps out. The gate closes behind him. The gate between Mafalda and Gustavo is still however closed. He is still pacing the fence, and quickly comes to inspect her through the fence. His attention is drawn away by a meaty treat thrown over the five-metre fence.

The drop gate between the two enclosures is open and the now awake Mafalda, immediately sprints away warily to her night house and lies down. Gustavo leaves his meat to check the gate between the two enclosures and then trots away to check up on Mafalda. He comes out after a while and trots away. In the adjacent enclosure, Messi paces curiously to be able to see all the comings and goings.

Peter and Christine stay for a while to ensure all is going to plan but soon the pick-up truck makes its way back to the clinic. It is almost mid-afternoon but the smallest tiger at LIONSROCK is now on her way to being healthy and happy.

As Hildegard says: “She has such a sweet nature and is such a calm animal and easy to work with. She can now live her best life at LIONSROCK.” 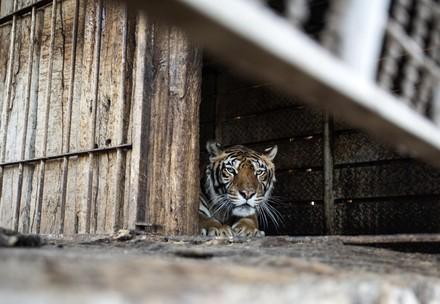 Stuck in a train carriage for 15 years 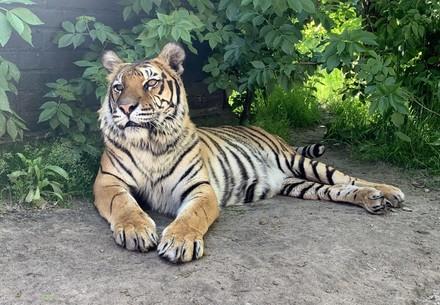 Year of the Tiger? 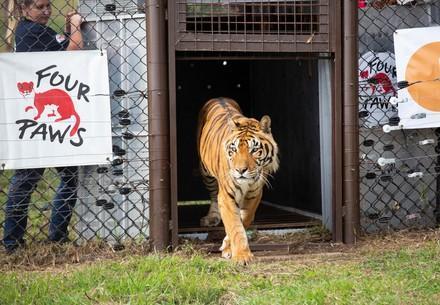 From Argentina to South Africa: ‘Train tigers’ feel grass under their paws for the first time