Donate
FOUR PAWS in South Africa Our StoriesBlog & NewsIn the wild or in a sanctuary, lions are proud to be a pride

Ever wondered if there is a difference between a lion pride in the wild and a group of lions together in a sanctuary? What is it that makes a pride proud to be a pride?

The five lions were rescued from a private keeper in Romania in September 2021. The lions are all from the same litter and the group consists of three males and two females.

He says one of the key differences between a group of lions at a sanctuary and a pride in the wild is that in time, wild lions have a lot more changes within a group compared to a group of lions in captivity. The dynamics within the group would thus change more often.

They live together and form a pride of their own at FELIDA and can often be seen spending time together in different groupings, with the sisters being especially close together.

Van Zon says when it comes to changes in group dynamics of lions in the wild, a pride usually has new male that will kick out the current dominant male and cubs will be born.

In the wild, there would also be competition for food and territory from other species.

“All of these factors influence the structures of the group. In many aspects, life for a pride of wild lions is harder than for groups in captivity. However, captive groups are not free from challenges. We can provide them with species appropriate care, but we also must work on problems specific to captivity, like stereotypical behaviour.

He explained that during the day and when playing during enrichment time, the one male called Roman is the most dominant of the FELIDA group.

However, this changes when it is feeding time and the male, Vincent, gets the first pick. Dolf is the smallest and most shy male of the group. He has been like this since the rescue. Van Zon feels although Dolf has improved during his time at FELIDA, his character is likely to stay the same, but he would be needing some guidance on this from his South African colleagues.

Of the two sisters, Ellie is the most dominant. She is energetic and a real rascal, while Geena is more relaxed.

On possible changes within the dynamics of the group once they are relocated, Van Zon says: “It is always difficult to predict how this will develop in a new situation. Social structures within lion groups are complex and change with age, group size, sexual maturity.”

In the beginning when the group arrived at FELIDA, occasionally tension arose between Dolf who is the least dominant lion of the group, and Roman, the more dominant male.

Van Zon says through training, food placement and behavioural observations, the FELIDA team were able to ease these tensions.

“In this case there is so far not an absolute leader in the group. Roman and Vincent are both the more dominant figures. You often see that brothers pair up together without having an absolute leader. I do not feel with this group there will be any significant changes in their everyday dynamics."

Van Zon believes the best strategy is to socialise the animals as young as possible, when the dominant hierarchy has not been established yet.

“If the lions are fully grown it is important to look at factors such as age difference, gender, and social interaction. For example, we usually do not socialise males together when they are full grown. We always try to put lions next to each other and really observe their social behaviour. If you do not see too much aggressive or scared interaction, you can start rotating their enclosures. This way they get used to living in each other’s territory.”

He points out that if this all goes well, the fence gates in-between enclosures can be opened, with all the precautions in place to separate them if necessary. “If this is successful, we slowly build the integration up.”

Van Zon says for now, the group is doing exactly what they expect them to do before their departure somewhere in the future to LIONSROCK.

“There they will have all the opportunities to play with enrichment, communicate with other groups and in general, have a comfortable life without pain, stress, and fear. I can only look forward to what they will get up to in a big enclosure under the African sun. I have full trust in our South African colleagues at LIONSROCK. They are specialised in dealing with a lot of lion groups. I am sure they will offer them the best care possible.” 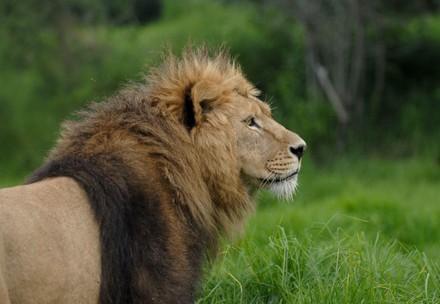 Lions In Care of FOUR PAWS

A FOUR PAWS project in South Africa since 2006

Our FOUR PAWS wild animal project in the Netherlands since 2014